Lodi California – You Probably have had wine from here…

Yep, you probably have had wine from Lodi CA, whether you are aware of this or not.  Lodi is a region that is best known for providing “tons” of grapes for economically priced wines.    Is Lodi new to you?  If you are a Zin drinker you have most definitely heard of Lodi, their signature grape?   But for the rest, this area is not typically well recognized or remembered.  Admittedly, I had to add a new viticulture region to VineyardVlog, as I had failed to originally add it in the list.   Lodi CA (map) sits 50miles South of Napa county, 35 miles East of San Francisco, and 80mile +/- West of the Sierra Foothills  – in somewhat of an area-non-grata.   Now this is not to belittle Lodi – actually I’d like to share my excitement for the people of Lodi and their mission to earn the attention of wine drinkers.

This tour of Lodi was strung together by Marc Hinton of enobytes.com who reached out to myself, Andrew Lazorchak of VineyardVlog and Christophe Smith (@corkdork) and invited us to join a private tour around Lodi California, with one other writer.  Our host for the day was Mark Chandler the Executive Director for the Lodi Woodbridge Wine Commission, who showed us everything from a “locals” perspective.  What was also nice, is that our whole group would be judging the California State Fair – Home Wine Makers competition the next day, so we got know each other all pretty well over the 2 days.

While I will continue on with my own notes about this trip.  We have compiled some video and decided to extract the discussions of climate, soil, and personal outlook of what Lodi is up to in this year 2010.

My Take On Lodi:

Lodi is struggling to lose it’s identity as a bulk-juice wine production area.  Even the name Lodi Woodbridge, for me, connotes a brand name that is associated with big bottled value wines.   The lay of the land is flat.  There is one soil type, sandy loam, which is very fertile  They have access to water for irrigation, and they are blessed with a high water table.  Their climate is heavily moderated by an inland delta or the “Calinas Straits”.   And on their eastern the border, they have the Sierra Mountains that bring cool air down in to the the great valley.   In exchanging tasting notes with our group, there was a common thread of monotony in the wines.  While the wines were good, no wines in particular jumped out and showed us something personal or indicative of the land.  (something I and VineyardVlog are always on the hunt for).  But please let me stress that this does not mean the wines are not good, as there were many palatable wines. 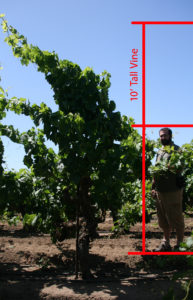 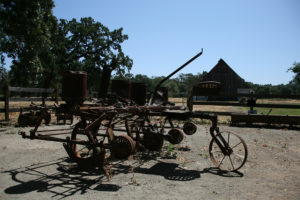 One of many amzing historical artifacts of
the early farmers.

as it made the historical importance and depth of Lodi abundantly clear.   JGW boasts 120+ year old vines.  These vines looked more like trees than vines –  They were massive!  With a history dating back to the 1850’s JGW had a great narrative of  how this wine country was birthed by early settlers and self-made farmers.  JGW has a very special historic farming museum on it’s property showing these early machines and the evolution of their estate and the success story of their family and community.

We next went to Van Ruiter Winery.  Again the wines were palatable and a few notable wines were in their tasting flight.  Van Ruiter is in the midst of a large expansion, mostly to house 100% of their production and bottling line under one roof.

Michael~David winery was remarkable, as not only was their tasting room modest, but Michael Philips and his wife were humble and approachable people.  I don’t know about you but if I was running a 300,000 case production facility, I would be a lot less calm.  But Mike had a remarkable demeanor.  They have shown how a small family winery can make it big with lots of hard work, and probably some guidance from their larger neighbors.

Abundance Vineyards was our next stop which was a fun one.  They had a very diverse line up including a sparkling wine.  Again the small winery getting bigger was the discussion, and of course their wines.

All in all, Lodi left a humbling impression on me.  I am not in awe of the wines being made there.  But I am in awe in the amount of hard work and energy that the wineries there are pushing for.  I am confident that Lodi will prosper as a region, and I think they will start to come in to their own, in the next 20 years.  We’ll have to see how their plantings, consumer demand, and climate change  evolve.  But clearly they are on fertile land and have a great climate for grapes…which is  a powerful combination when hard work is added.

Don’t be afraid of Lodi Wines, but expect a good deal, until they surge in to  their grape-ological sweet spot.

This entry was posted in Lodi / Woodbridge. Bookmark the permalink.

Any cookies that may not be particularly necessary for the website to function and is used specifically to collect user personal data via analytics, ads, other embedded contents are termed as non-necessary cookies. It is mandatory to procure user consent prior to running these cookies on your website.